The way players now return the serve in tennis has evolved over the past decades, and few players have mastered the technique and strategy the way Djokovic has. Mark Kovacs, a sports scientist and coach at Kovacs Institute, helps break down the modern return and Djokovic’s mastery of it. 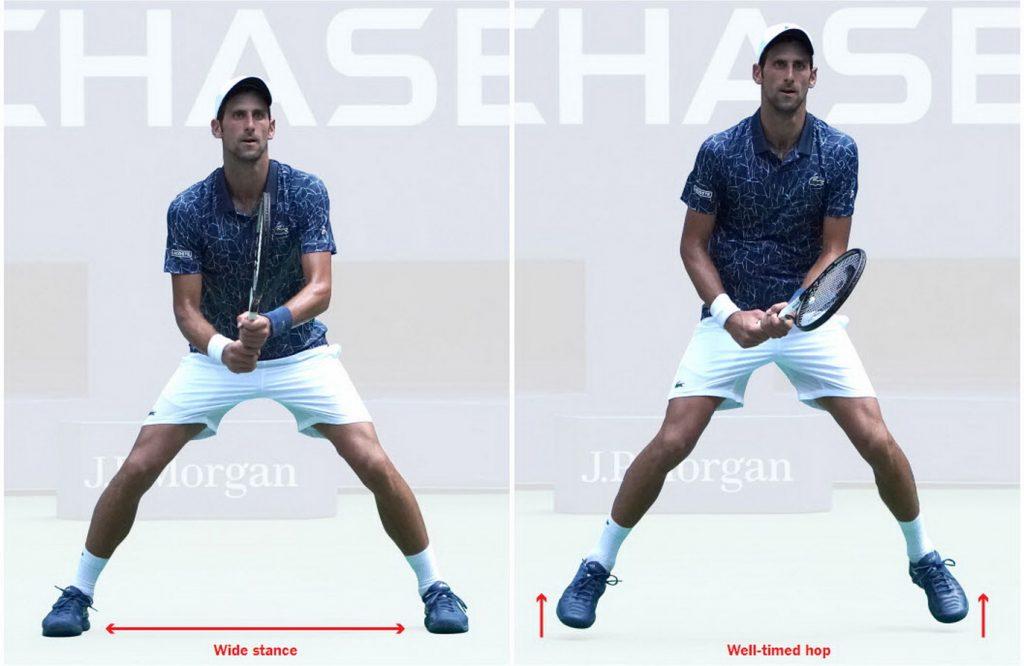 Djokovic uses one of the widest stances in the game, giving him a stable base to store huge amounts of energy, much like a powerlifter. The stance helps him engage the large muscles of his upper legs for an explosive move to the ball.

It was not that long ago that players didn’t use such a wide stance on their returns. Roger Federer, when he began his career in the late 1990s, used a much narrower stance than he does today.

The wide stance is a direct result of a generation of players who concentrate heavily on strength training. It takes a lot of power to spring quickly from a wide stance, but for those whose muscles can handle it, the benefits can be remarkable.

The short hop that Djokovic uses when he anticipates the serve helps release all that stored-up energy and begins a chain reaction that will end with his shot.

But this brief hop in the air has to be precisely timed, and what he can see and process in that split second is what separates Djokovic from most of the players on tour. 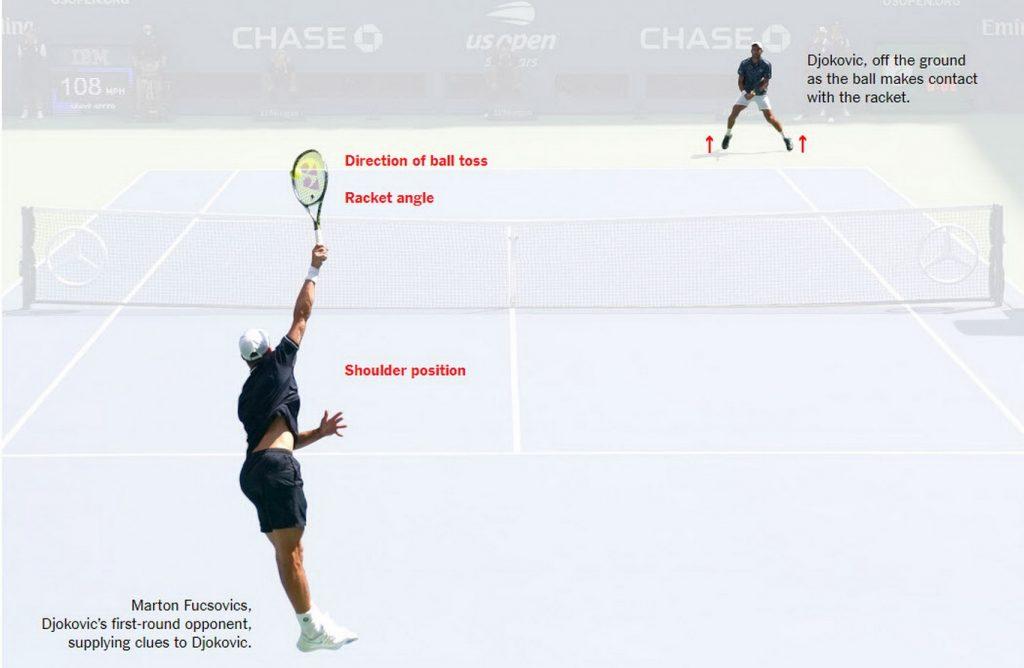 As you can see in the image above, the top of Djokovic’s jump is timed to the exact point of contact between the ball and his opponent’s racket. During these milliseconds, he is reading cues from the server to determine where the serve will go.

Djokovic studies analytics to understand serving patterns of opponents. He reads the direction of the server’s toss and the angle of the racket at impact. He looks at the angle of hips and shoulders, and he knows what the server is likely to do when the score is, say, 30-40.

These clues help decipher whether the serve will be a hard, flat shot down the middle or one slicing wide.

And all this is done in the narrowest window of time.

“All these guys who are great returners are understanding what is happening before it is happening,” Kovacs said.

Quick to the Ball

This is a great photo sequence where you can see how he pushes of the outside leg, making very short turn with hips and shoulder – many players turn too far back with hips and then even pushing their arms further back. The racket stays fixed to his hip, going back as far as the hip. The hip stops, the racket stops. Step three short swing with a long follow through.

By the time Djokovic lands from his hop, he knows where the serve will go — this time to his left.

So he lands with more force on his right leg for a strong push-off to his left, continuing the chain reaction that began with his hop. That reaction continues with the opening of his left hip followed by the left shoulder, and it will continue through his arms and hands until the shot is complete.

This gets him to the ball quickly and puts his body in position to execute a strong and accurate backhand return.

Djokovic’s intent when returning a serve is not to win the point outright — it’s a low-percentage shot to aim for the baseline and sidelines when serves are traveling so fast. Instead, Djokovic neutralizes the server’s advantage by getting the ball back in play to strategic spots on the court, knowing that he would win a groundstrokes war against most players on tour.

As you can see in the charts above, he is good at redirecting serves to the server’s backhand (the left portion for right handers), especially on the slower second serves. And you can see that he largely stays away from the risky baseline shot. Djokovic can now better control the point, turning what is usually an advantage for the server and making it his own.

When you practice or playing practice matches, focus on:

FacebookTwitterRedditLinkedInTumblrPinterest
Page load link
We use cookies and similar technologies to enhance your user experience on this website. To see which cookies we use and how to disable them, CLICK HERE. By clicking "Accept", closing this banner, or using our site, you consent to the use of cookies unless you have disabled them.Accept

This website uses cookies to improve your experience while you navigate through the website. Out of these, the cookies that are categorized as necessary are stored on your browser as they are essential for the working of basic functionalities of the website. We also use third-party cookies that help us analyze and understand how you use this website. These cookies will be stored in your browser only with your consent. You also have the option to opt-out of these cookies. But opting out of some of these cookies may affect your browsing experience.
Necessary Always Enabled
Necessary cookies are absolutely essential for the website to function properly. This category only includes cookies that ensures basic functionalities and security features of the website. These cookies do not store any personal information.
Non-necessary
Any cookies that may not be particularly necessary for the website to function and is used specifically to collect user personal data via analytics, ads, other embedded contents are termed as non-necessary cookies. It is mandatory to procure user consent prior to running these cookies on your website.
SAVE & ACCEPT
Go to Top